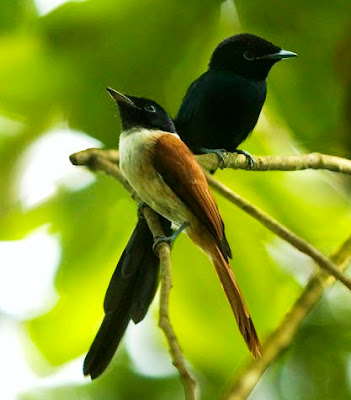 Range:
This species is endemic to the Seychelles archipelago, being mostly found in La Digue, but also in Marianne, Praslin and Félicité.

Size:
The males are considerably longer than females because of their long tail feathers. Males are 22-31 cm lon while female are 17-20 cm long.

Diet:
The Seychelles paradise-flycatcher is strictly insectivorous, gleaning insects and spiders from the leaves. Dragonflies, mosquitoes, grasshoppers and butterflies seem to form the bulk of their diet.

Breeding:
Breeding can occur all year round, although there appears to be a peak in activity in November-April. The oval bowl-shaped nest is built on branches and consists of twigs, palm fibre, and spider webs. The female lays just 1 white egg with reddish-brown spots. The egg is incubated for 17 days and the chicks fledge 14-15 days after hatching but continue to be fed by the parents for another 2 months.

Conservation:
IUCN status - CR (Critically endangered)
The Seychelles paradise-flycatcher has an extremely small breeding range and the global population in currently estimated at just 210-280 individuals. The species is mostly threatened by the alarming rates of habitat loss and fragmentation, due to tourism and private housing developments but also because of a wild disease affecting takamaka stands. Nest depredation by alien mammals is another significant threat. Conservation measures, namely habitat restoration, the protection of water quality in the wetlands and pest elimination has lead the population to recover from an historic minimum of 50-60 individuals in the 1980s and the current population trend seems to be stable.
Posted by Unknown at 10:00