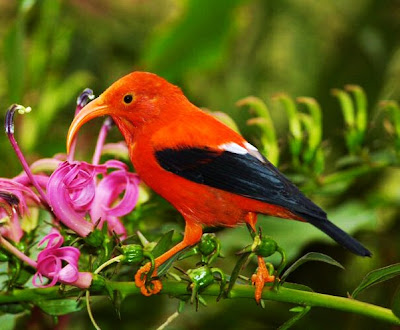 Range:
This Hawaiian species was originally found on all the main islands in the Hawaiian Archipelago, but is now extinc on Lana'i and only relict populations remain in Moloka'i and O'ahu. It is still widespread in Hawai'i and Kaua'i.

Habitat:
This species was formerly found in forests at any elevation, and still occurs in a variety of native, disturbed and unnatural habitats at altitudes of 300-2.900 m, with some preference for wet and moderately wet forests above 1250 m.

Diet:
Iiwis are nectar feeders and their bill was originally adapted to exploit the nectar of the similar shaped flowers of Campanulaceae. A decline in these plant species forced them to feed on the nectar of other plants such as ohi'a (Metrosideros polymorpha) and the introduced banana poka (Passiflora mollissima). Iiwis are believed to be important plant pollinators.

Breeding:
These birds breed in February-September. The nest is built by both sexes, usually in an ohi'a tree, and is constructed from twigs, bark and lichens, lined with petals and down feathers. The female lays 2-3 bluish eggs which she incubates alone or 14 days. The chicks fledge 21-24 days after hatching.

Conservation:
IUCN status - VU (Vulnerable)
The iiwi has a small and contracting breeding range and a global population estimated at 350.000 individuals. The population is declining, owing mostly to their susceptibility to avian malaria, carried at low elevations by introduced mosquitoes. Other factors which are likely to be contributing to this decline include habitat degradation and predation by introduced mammals such as cattle, pigs, cats and rats.
Posted by Unknown at 10:00