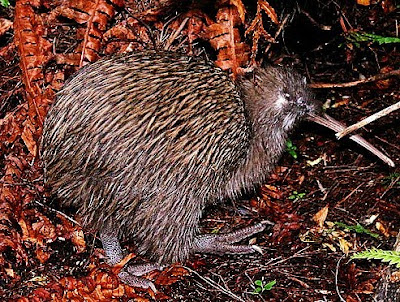 Range:
The brown kiwi is restricted to Fiordland in the South Island of New Zealand. They are also found in Stewart Island.

Habitat:
Brown kiwis are found in densely vegetated habitats, mostly temperate and sub-tropical forests, scrubland and grassland. In Stewart Island they are found on sand dunes.

Breeeding:
Brown kiwis are monogamous and pair for life. The nests are made in burrows or sheltered beneath thick vegetation, and the female typically lays just 1 egg. The male incubates the egg for 90 days. A few days after hatching the chick will exit the nest and feed on its own, but it may stay near the parents for up to 1 year.

Conservation:
IUCN status - VU (Vulnerable)
The brown kiwi population is estimated at 27.000 individuals. They have a restricted breeding range and are declining fast due to predation by introduced species. Cats, stoats Mustela erminea and brush-tailed possums Trichosurus vulpecula eat chicks and juveniles up to c. 1200 g, while dogs, ferrets Mustela furo and the brush-tailed possum kill juveniles and adults. The predation pressure is believed to be lower in Stewart Island, where the population is more stable.
Posted by Unknown at 10:00