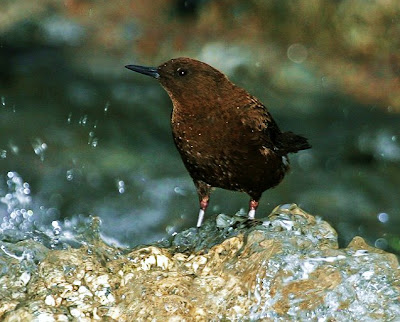 Range:
The brown dipper is found in the mountains of southern and central Asia, from Afghanistan and Kazakhstan to Tibet, Nepal, northern India, northern Burma and northern Vietnam. Another disjunct population is found from southern Siberia, to Kamchatka, northern Japan and northern China. They are mostly sedentary, but may move to lower altitudes in winter.

Habitat:
Brown dippers are found along rushing mountain streams and mountain lake, generally in rocky shores. They are typically found at altitudes of 800-5000 m.

Breeding:
The breeding season of the brown dipper varies between different regions, but generally occurs
in December-July. The nest is built by both parents, usually on a ledge or in a crack in the rocks, behind a waterfall or, more rarely, between stones, always within 2 m of the water. The nest is built using moss with some grass and rootlets and is lined with dry leaves. The female lays 3-5 eggs which she incubates alone for 19-20 days. The chicks are fed by both parents and fledge 20-24 days after hatching, but continue to be fed by the parents for a few more weeks. The pair may start a second brood while still feeding the first chicks.

Conservation:
IUCN status - LC (Least concern)
Although the population size is unknown, the species is described as common and widespread on suitable watercourses throughout its range. It may be susceptible to habitat degradation, but much of its range has very sparse human habitation, and there is no evidence for any declines or substantial threats, so this species is not considered threatened.
Posted by Unknown at 10:00