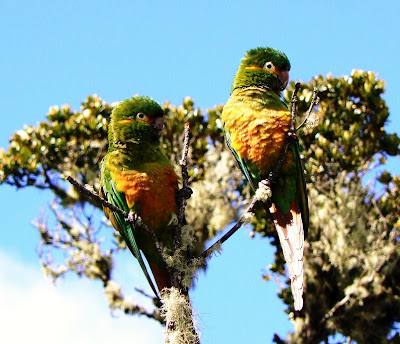 Range:
This South American species is found in the Andean slopes of Colombia, Ecuador and Peru.

Habitat:
These birds are found in temperate, cloud forests and elfin forests, usually dominated by evergreen conifers (particularly Podocarpus). They are typically present at altitudes of 2.400-3.400 m.

Diet:
Golden-plumed parakeets predominantly feed on conifer seeds (mostly Podocarpus) as well as the seeds and fruits from a few other plants, including Rosacea, Elaeocarpaceae, Lauraceae, Brunelliaceae, Loranthaceae, Moraceae and cultivated maize. They may occasionally take other plant material, namely leaves.

Breeding:
This species has a very variable breeding season, probably corresponding to food availability, and may not be seasonal. Nests are mostly made in wax palms (Ceroxylon), although other plant species may also be used, and consist of a cavity near the top of the tree trunk. holes made by other bird species (e.g. Piculus rivolii and Campephilus pollens) may also be used. The female lays 2-3 eggs which are incubated by both parents or 28-32 days. Only the female incubates by day, while both adults incubate during the night. Chicks fledge 64-68 days after hatching and are fed by both parents while in the nest.

Conservation:
IUCN status - VU (Vulnerable)
The golden-plumed parakeet has a relatively small breeding range and a global population estimated at 2.500-10.000 individuals. The population is believed to be declining rapidly due to ongoing large-scale habitat destruction, degradation and fragmentation. In some areas of Colombia over 90% of the original mountain forests have been lost. Elsewhere the rate of destruction is not as serious, but burning and grazing of páramo, settlement, clearance for agriculture, road construction, logging, narcotics and gold mining are all negatively affecting this species. The golden-plumed parakeet is also trapped as a maize pest and as a pet in Colombia.
Posted by Unknown at 10:00